Is It Worth Upgrading My Apple Device Right Now?

These are interesting times for Apple fans but, in the middle of a flurry of new product launches, should we be rushing out to replace faithful old devices with the newer version?

We’ve got used to regular launches of ‘new, improved’ versions of everything we use, especially IT. Often though, you get home with the latest smartphone or tablet only to find it’s basically the same as the old one, but in a new colour.

However, I think Apple has made a genuine effort this year with some new ideas, as well as some significant improvements on existing ones which look like the company has been listening to its users.

The new large-screen iPad Pro is expected in November and you’ll see a real difference compared to its previous tablets. Most significantly, its 12.9-inch screen is twice the size of the Air 2 but, according to reviews, is well-balanced and easy to hold. There’s no compromise on pixel density either, yet the Pro is only 1mm thicker, and due to clever energy-saving features, its battery life is similar too.

The iPad Pro comes with some nice accessories, including a stylus, or ‘Apple pencil’. This is great for the artistic; the screen is sensitive to both drawing angle and pressure so you can recreate a realistic pencil effect on it.

There’s a new smart connector for an easy-to-use, detachable keyboard and Apple has also doubled the number of speakers to four – great for TV fans, film buffs and gamers.

I’m excited by all the new products and ideas coming out of Apple, but before rushing to upgrade, check out the enhanced version first, to see if it really makes life easier, before you discard old faithful. After all, if you’re tempted to go with Apple again, your old device must have served you well.

Contact us at iSAAC for any help in seamlessly transferring your existing iPad information to the iPad pro.

Orange light blinking on your Airport Express or Airport Extreme? Read on! 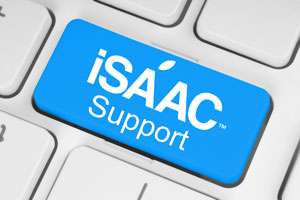 We are certified Apple Support Specialists and Microsoft Partner Professionals working from our base in Sherborne Dorset. iSAAC is here to help when your computer technology needs specialist care.

If you’ve got a problem – we can fix it!